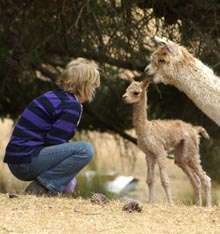 Like so many breeders, Sarah & Perry Wheeler started breeding and, later, showing alpacas as a hobby but, with success in the show ring for their Prados herd and a growing reputation in the industry it soon became clear that this was becoming something much bigger than just a weekend pastime.

Joined by their son James who has established his own Kobler herd, the combined brand became known for the quality of its animals and as a model for other small breeders, proving again and again that limited size and resources does not have to mean limited opportunity for success.

However, by 2012 both the business and the wider alpaca industry had reached a crossroad and it was time to ask a difficult question, did they want to remain breeders or was the time right to try to become farmers?

For the Wheeler's there was no real question, they literally 'bet the farm', selling their small acreage in Meadows in the Adelaide Hills and buying Red Bank Springs, an old sheep and cattle property in Hindmarsh valley where they immediately started to expand to help service the growing demand for fibre and to establish, through the partnership in Fleurieu Prime, a market for Alpaca Meat in South Australia and beyond.

Today, genetics and success in the show ring are still important, but so is building their commercial herd and playing a significant part in the development of a sustainable alpaca industry.

That doesn't mean it's ever stopped being fun though.