The species guarded by the alpacas does not seem to matter, once the alpaca has
established a paddock as ‘their territory’ and bonded with the livestock or poultry they are to
protect, they work hard to ensure the paddock is clear of canines 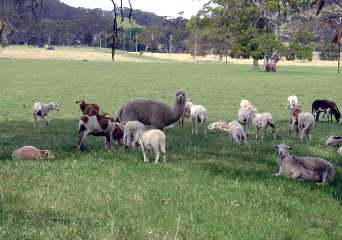 Farmers, all over Australia, are discovering the value of alpacas as herd guards. Alpacas, like other members of the South American Camelid family (the Llama, Guanaco and Vicuna), have a strong herd instinct and are very protective towards each other and particularly to their young.

What makes the alpaca special however, is that this bond will extend to other animals, particularly sheep and goats and they will watch over them as if they were members of their own herd.

A study carried out at Charles Sturt University and published in 2005 found that, in mobs of sheep ranging in size from 300 to 1500, the mobs that had two alpacas running with them experienced an increased lamb survival rate of a little over 13% - a very significant return on investment for the farmer when mature, wethered guard animals can be purchased for less than $500 and be expected to work effectively for at least twelve years (usually, considerably longer).

For the smallholder who is running a few sheep or goats, the benefit is just as great, lost and injured lambs and kids can be a heartbreaking experience for the hobby farmer. The addition of a couple of alpacas can go a long way to reduce this and will bring the added benefit of an annual fleece or two to sell or work with.

How to buy a guard

Any registered breeder should be able to supply guard alpacas. Demand is high, so sometimes it may be necessary to book in advance or to buy a younger animal and bring it up on your own property, this has the advantage of giving them more time to acclimatise to your farm, people and dogs.